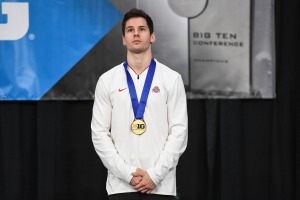 Alec got his start in gymnastics like many others, at the age of four in “mommy and me” classes to channel his energy in a positive way. He fell in love with the sport and quickly showed potential.

Starting his elite career in 2013, Alec qualified to be a member of the U.S. Men’s Junior National Team where he began competing internationally. Between 2013 and 2014 he had won a multitude of international medals and was chosen by the United States Olympic Committee to represent the USA at the 2014 Youth Olympic Games in Nanjing, China, where he returned home with an All-Around Bronze medal.

In 2015, Alec qualified to the U.S. Men’s Senior National Team, in which he is still a current member. The U.S. Men’s National Team came home with a 4th place finish at the 2018 World Championships, the highest finish since 2014.

Receiving a full ride scholarship from the Ohio State University in 2015, Alec has been a rock-solid member of their team throughout his college career. A shoulder injury sidelined him in 2016, also causing him to miss out the 2016 Rio Olympic Games. He credits his injury to teaching him patience and persistence and reminding him of his love for the sport of gymnastics.

Most recently, Alec has completed his extremely successful NCAA career and has his sights set on the 2020 Olympic Games in Tokyo. He is currently training and competing towards his goal.

Outside of the gym, Alec is passionate about his faith and family. His family includes his Mom, Dad, older brother, and younger sister. Alec loves traveling and experiences new cultures and collecting mementos along the way.