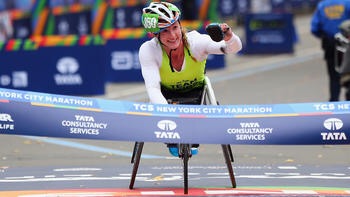 With Rio 2016 fast approaching, the US Paralympic and world champion is about to become a firm household name in the US according to industry experts.

With Rio 2016 fast approaching, the US Paralympic and world champion is about to become a firm household name in the US according to industry experts.

She says her role model is Serena Williams, a peer who has overcome just as many hardships, a competitor who is equally as persistent, and a winner who has been just as dominant at her craft.

What Tatyana McFadden does not share with the tennis superstar is her bank account, Williams is one of the world’s highest paid female athletes, taking home USD 25 million in 2014. She is also one of the world’s most endorsed athletes with 17 different corporate clients according to a popular sponsorship tracking website.

With the Rio 2016 Paralympic Games right around the corner, the gap between McFadden and Williams is about to get smaller, as the best US athlete the general public knows little about is ready for her close up.

“I feel that Tatyana could become the first Paralympic athlete to become a household name in the United States,” said Dave Mingey, President and Founding Partner of GlideSlope, which consults for several companies who activate around the Olympic and Paralympic Games.

“We’re continuing to see a rapid rise of awareness and interest in the Paralympic Games, including NBC’s increasing commitment to broadcast and promote Rio 2016. Brands looking to engage customers through sport should be paying attention to her.”

McFadden’s rags to riches fairy tale, growing up in a Russian orphanage to becoming one of the world’s most transcendent athletes, is at the heart of why sponsors attach themselves to the Games. The pioneers of sport who have come before her recognise the pattern.

“If you can tell a great story, people are going to relate to it,” tennis pioneer Billie Jean King said of McFadden. “It’s that human element that makes people excited. It makes them care. It attaches them to the athlete in ways few others can and sponsors want to attach themselves to it.”

“And winning? That helps too.”

The Paralympic Movement have known about McFadden since 2004, having burst onto the scene during Athens 2004 with a silver and bronze medal performance on the track. There were another four podium finishes in Beijing in 2008 and a trio of gold medals during London 2012. In total, the University of Illinois graduate has won 10 world titles, 12 World Championships medals and even a cross-country skiing silver medal during the Sochi 2014 Paralympic Winter Games.

The majority of that hardware has come at shorter distances, everything from a 100m sprint to the 1,500m, still considered a quick race in wheelchair racing.

Then 26.2 miles became McFadden’s calling, not to mention a big business opportunity.

“I started marathoning in 2009, so fairly recently,” McFadden said of her success. “I had to learn and go through many of the trials and tribulations as everyone else, able bodied or not.”

In 2013, McFadden won the Boston, Chicago, London and New York City Marathons, making her the first person, able-bodied or otherwise, to win the four major races in the same year.

This was all happening as marathoning became big business in the United States. Last year, 550,600 Americans completed a 26.2 mile race, up from a meagre 25,000 in 1976. Nearly 19 million US citizens completed a road race of any kind in 2014 and there were approximately 850 marathon races held in total. Overall, the National Runner Survey reports that 76 per cent of marathon runners have a college degree and 73 per cent have an annual household income of at least USD 75,000.

Sponsorship for the sport is at an all-time high, as is community support. The 2014 New York City Marathon, which saw competitors who ranged from 18 to 95-years-old, generated USD 415 million for the local economy according to Forbes Magazine.

“It takes a lot of strength and courage to say ‘yeah, I’ll run 26 miles.’ It’s such a great accomplishment to say you’ve been able to do that,” McFadden said. “And you really have this community in marathoning that you don’t have in track and field. People love to come together, share stories and the whole atmosphere around the sport is part of the appeal.”

That community was one of the reasons why the Ironman Triathlon, another favourite of the country’s growing love of endurance sport, was sold for USD 650 million in 2015.

Part of McFadden’s appeal in the marathon world is her consistency. She shows up. She wins. She returns the following year. This gives her a unique marketing edge few in the distance world have, including her able-bodied US counterparts like Shalane Flanagan and Kara Goucher. When the starting gun goes off on in Boston on 18 April, neither will be there, as both will be recovering from the country’s Olympic trials in February. McFadden will, with name recognition as a three-time defending champion.

Neither Flanagan and Goucher are likely to be in Chicago either, given the proximity in timing with the Rio 2016 Olympic Games.

McFadden will, going for a sixth straight title.

“If I were a Fortune 500 company, I would certainly invest in her,” said Kathrine Switzer, the first woman to run the Boston Marathon in 1967. “We’re at the point where brands aren’t looking at her as a terrific Paralympic athlete, but a terrific athlete, period.”

McFadden has already been aligned with major US sponsors in the lead up to Rio 2016, including BP, and both will enjoy the luxury of activating around her at the 2016 London and Boston Marathons beforehand.

“She’s one of the greatest athletes in the world,” said Switzer. “She has taken the sport to a new level and while I wouldn’t use the word unbeatable, she’s pretty special.”