While the ESPYs were celebrated for activism and altruism and awkward red-carpet humor, perhaps the most meaningful awards of the evening may have gone relatively unnoticed:

The winners of Best Female and Male Athlete with a Disability were Tatyana McFadden and Richard Browne.

McFadden, a wheelchair racer, was born with spina bifida that paralyzed her from the waist down. She spent the first six years of her life in a Russian orphanage with not so much as a wheelchair, and learned to walk on her hands to keep up with other children. She was brought to the United States after being adopted by her mother, Deborah. 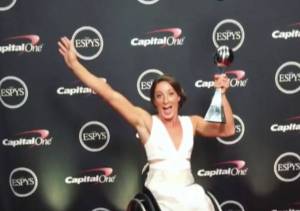