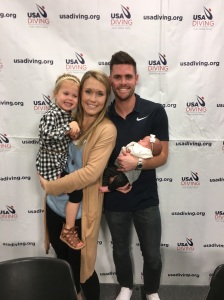 Seven-time USA Diving athlete of the year and three-time Olympian David Boudia announced on Tuesday that he will return to competitive diving, ending his one-year break from the sport following the Olympic Games Rio 2016.

Boudia said he decided in January that he would return to the sport and in June decided to “pull the trigger.”

“I’ve been training since June and hopefully I’m going to make a fourth run to the Olympic Games in Tokyo,” he said Tuesday afternoon in an announcement broadcast on USA Diving’s Facebook page.

Boudia, 28, said that he needed a mental break from the sport and also wanted to make sure that he would be able to remain competitive physically. Those weren’t the only reasons for deciding to return, however.

“More importantly I just saw the amount of opportunity I had to go on a stage to speak, whether to a secular audience or a faith-based audience,” he said. “I think it’s no secret my faith is my No. 1 driver, so being able to see how many people I could impact on this big stage, it’s a huge responsibility. There’s lot of weight to it, and I just want to try to be as faithful as I can.

“I look back on the last four years leading up to Rio and I thought of missed opportunities where I could have been a better mentor to my teammates and more loving to the people coming up to me. I believe God gave me this platform to use it for him, and so that’s a big driver of why I want to continue.”

He announced his return on the campus of Purdue, his alma mater, surrounded by coach Adam Soldati and USA Diving CEO Lee Johnson. Boudia won six NCAA national titles there and in 2016 was inducted into the Purdue Athletics Hall of Fame.

Boudia and his wife Sonnie had their second child on Aug. 24.

“I’m going for another Olympics and it’s not going to be easy, but my wife has been unbelievably supportive,” he said. “She was a little dumbfounded when I said it in January, but as it’s gone on she’s been awesome and loving so I’m extremely thankful for her as well.”