She wants nothing more than to shut her eyes and remember every flip and every twist he did, with nothing but the sky as the backdrop to his brilliance. It was, at one point in her life, impossible to forget.

But now the gaps in her memory are far more frequent than before.

It hasn’t been the same since she lost her son, the daredevil, trailblazing Olympic medalist.

“I guess your brain shuts down to kind of protect you,” she said.

Linda Peterson does her best to piece together the intricacies of the high-flying stunt Jeret “Speedy” Peterson invented, perfected, the one with which he became synonymous. It takes her some time, but she starts to envision the takeoff, the landing, and every heart-stopping mid-air rotation in between.

The in-between is where the world held its breath, watching Peterson contort his body unlike any other, and where the world finally exhaled when his skis returned to earth, kissing the snow.

“What comes to mind is that it’s a real … you’ve got to be … it’s very precise,” she said, the bits and pieces of highlights returning. “If you mess up, you can be in big trouble.”

Peterson’s speciality was known as “The Hurricane,” a 3-second-long flight filled with five twists and three midair flips. The conclusion was the fearless blind landing. He spent the better part of five years perfecting it off the training ramps into the pool at the Utah Olympic Park to finally sticking it on snow in 2010. The trick won him a silver medal in men’s aerials at the Winter Olympics in Vancouver.

And when Peterson died from suicide in Lamb’s Canyon the next year after a lifelong battle with depression, the Hurricane seemed to leave with him.

But like Linda Peterson, Mac Bohonnon had been thinking about the trick, too.

While training on the same Park City summertime jumps where the late mentor developed the Hurricane more than a decade ago, Bohonnon, a 2018 Olympic hopeful, considered the 3-second flight, its spins and flips, its difficulty and significance.

“Why not?” Bohonnon thought to himself. “Let’s do it.”

An idol and friend

Speedy was first his idol, then a teammate.

Bohonnon joined the U.S. development team as a young teenager, capitalizing on his talent to fly high between trampoline jumps, twist, flip and land. He was almost 15 when Peterson landed the Hurricane in Vancouver, won silver and garnered worldwide attention. Bohonnon was at the bottom of the hill. He saw it live. Through it all, Peterson never ignored the youngsters, the future aerialists who aspired to someday maybe have the nerve to soar like he did.

“I think it’s really easy, I thought at the time, for athletes to kind of disregard younger athletes,” said Bohonnon, who grew up in Madison, Conn. “That was never the case with Speedy.”

Now the 22-year-old aerialist and part-time University of Utah student is paying homage to his friend and idol in the most Speedy way: Going for it. Not blinking.

Bohonnon is crunching in less than a year’s worth of practice on the trick, which is daring to say the least — and in an Olympics year, no less.

Bohonnon estimates he did around 100 or so Hurricane attempts into the aerials pool at the Olympic Park this summer.

Incorporating a trick of this magnitude in such a short amount of time is a flight risk. He said this week that he’s still yet to land the trick on snow. Bohonnon will call on his muscle memory to kick in, and soon.

“Because that’s what it’s going to take this year [at the Olympics],” he said.

And Bohonnon, like Peterson before him, doesn’t tremble on the hill.

He finished fifth overall in aerials as a surprise 18-year-old first-time Olympian at the Sochi Games in Russia. Bohonnon won the World Cup overall title at 19 a year later in 2015, becoming the first U.S. male aerialist to do so since Peterson 10 years earlier in 2005.

When Linda Peterson found out that one of her son’s former proteges was going to try to incorporate the trick into his repertoire ahead of the 2018 Olympic Games in Pyeongchang, South Korea, she was left stunned and speechless.

“That’s an incredible honor that he’s doing that, picking up where Speedy left off and carrying it forward,” she said.

Now the pressure is on. Assuming Bohonnon qualifies for his second straight Olympic Games in Pyeongchang, South Korea, next month, the Hurricane will be in his back pocket, ready to be unleashed.

“If anybody can pull it off and bring gold home, it’s going to be him,” Linda Peterson said. “It’ll be Mac.” 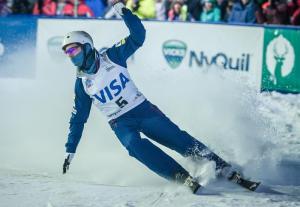 His signature move earned its label because, as Peterson once explained, the combination of twists and flips looked like a human being being thrust around in a hurricane.

“It just was obviously what it is,” said Trace Worthington, Peterson’s former coach, who will serve as the lead commentator for NBC’s freestyle coverage in South Korea. “He’s spinning, flipping and spinning and twisting very fast, and it’s just a whirlwind. It’s a mess.”

Why is a maneuver such as the Hurricane considered so risky?

First off, timing is everything.

Every box has to be checked not only to start the trick but to execute every facet of it before even considering the landing.

Worthington said the jumper must spin a full twist along with the first flip before moving onto the second portion of the Hurricane, which features three full twists on the second flip attempt. That’s where it gets dicey, Worthington says. A clean take off is necessary to get through the three twists.

“Your body line has to be super perfect and tight and you’re also taking your eyes completely off everything,” he said. “It’s all feel.”

To complete the last twist and flip, jumpers are flying in the dark with nothing but muscle memory and perfect execution to get them back on their own two feet.

“When you’re doing a trick as difficult as the Hurricane, how much work goes into it, how much technique goes into it, that you can do that kind of trick,” explains Kris “Fuzz” Feddersen, “it’s so off the average person’s chart or radar of what goes into it to make that happen.”

Feddersen is a former Olympic aerialist, who along with Worthington, created Flying Ace Productions, which allows Olympians to perform in the summertime at the Olympic Park. Not only does it help the athletes financially, it allows them more prep time to dial in their jumps before the upcoming winter seasons.

When Peterson first started to implement the Hurricane, he’d do so into the pool during their shows. Feddersen called every attempt a “50-50 proposition.”

“[Speedy] used our shows as kind of a training device,” Feddersen said. “He said I have to hit the Hurricane right now in front of this group of people that are here. It started off as being a 50-50 proposition. It got better.

“Mac’s a little bit more deliberate in his training and working on technique more to build up to that trick. He’s not just hucking it, which is kind of how Speedy did it.”

Removing the nostalgia and emotions of the trick, Bohonnon said, is key. He’s adapted well to the blueprint of what it takes to land the Hurricane, although it’s only been splashing into the pools at the Olympic Park.

“It was way easier than it should have been for me,” he said. “It was still hard. I’m not saying it’s an easy trick. There’s something special about that trick, no doubt.”

Will he? Will he need to?

From the start, he believed he could do it.

Bohonnon’s strength in the air is his ability to spin, which is one of the main reasons why the Hurricane transitioned from what once was a lofty goal to a reality in one summer. But it’s the most nerve-wracking of tricks. Every time he preps for it, he still understands that the commitment on a Hurricane attempt is unlike any other in aerials.

“Sometimes you just get into that wrap,” he said, “you can’t see the ground and you’ve got to trust that it’s going to work out.”

There are days when it hits him.

That he’s closing in on another Olympics, this time as a potential medal contender — if he earns another Olympic nod — and not just a starry-eyed teenager happy to be there. Then he’ll remember what the Hurricane could do if executed properly in front of the global audience.

“I know how many years Speedy spent on that trick trying to perfect it and taking hard crashes,” Bohonnon said. “I feel like I’m cheating him almost, trying to figure it out that quick.”

Feddersen believes there’s a chance Bohonnon might not need to unleash the Hurricane, that weather conditions and the scores of his other attempts very well could play a role in Bohonnon’s decision-making process. There’s enough in his arsenal, Feddersen added, that the risk of the Hurricane isn’t imperative.

There are variations of the Hurricane that routinely have been used by the world’s top aerialists since Peterson introduced it. The Chinese are favorites heading into Pyeongchang, and Worthington said he’s seen the top jumpers throw five twists and three flips.

“But it wasn’t the Hurricane,” he said.“

“Don’t get me wrong, I would love to have two years of Hurricanes under my belt and know that I’ve got the first ones out of the way and I’ve done it in competition,” Bohonnon said. “That would be awesome. But we don’t live in a perfect world.”

“[Mac] may do it the best he can, and there may be five or six guys that are doing it too, then it comes who does it best?” Feddersen said. “It’s not like just because you throw the Hurricane anymore and put it on your feet guarantees you that podium.”

It was a “50-50 proposition” for Peterson so many years ago until the culmination of it on that storied night in Vancouver. Peterson flew and changed the sport in doing so. Can Bohonnon pull it off with less than a year of full-time training on the move?

Will he even need to?

“Mac really seemed to lock into that, I think, and really liked the way it worked for his style of jumping,” Feddersen said. “I’m just hoping he can put it down for all of us and Speedy this winter.”

There isn’t a concrete date or training jump in mind for Bohonnon to give it a whirl. The plan lies somewhere in the weeks leading up to Pyeongchang.

“I’m really psyched to bring it to snow,” he said this week, “really soon.”

Linda Peterson planned on tuning in incrementally to the 2018 Olympic Games before she heard Bohonnon was prepping to perhaps honor her late son. Now she says she’ll be glued to the TV in her home in Boise, Idaho. Like everyone else, she has to see it to believe it, to help piece together the gaps, to remember the in-between.