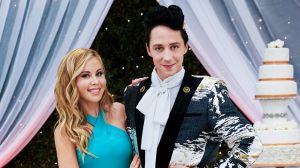 This is one gold-medal pair. Fashionable and funny Olympic figure skaters Johnny Weir and Tara Lipinski are trading their usual sideline-commentary gigs to host Wedding Cake Championship — new competition that gives six teams of bakers a shot at designing the centerpiece confection for Lipinski’s upcoming anniversary.

But first, we had the besties — whose outrageous coordinated outfits were a hit at this year’s Winter Games in PyeongChang, South Korea — break down their own sweet relationship.

How did you first meet?

He said: Covering the 2010 World Championships for Universal Sports. We had an immediate connection. By the end of the week we were essentially spooning on a couch for our viewers.

She said: The skating world is small, so we had known of each other for a long time. We worked together briefly in 2010 and hit it off. Then we reunited leading into the 2014 Sochi Olympics. I was covering ladies’ figure skating, Johnny was covering the men’s events, and we overlapped in the studio one day.

He said: Of course that she is beautiful and tiny!

How did you realize you needed to be best friends?

He said: Despite our fantastical appearance and the fact that we’re only in our thirties, Tara and I are very deep people who have lived a lot of lives. We can laugh and commiserate on a level that so few people I meet can relate to.

She said: It just happened. There was an immediate, undeniable connection, and we both recognized it.

How exactly does one judge a wedding cake competition?

He said: Presentation, style, technique and taste. Just like figure skating — aside from taste, of course!

She said: We are purely hosting, not judging, but we got to taste a lot of the cakes, which were all insanely good.

Who’s more likely to be on the dance floor at a wedding?

He said: Tara, for sure.

She said: Most definitely me.

And at the bar?

He said: Both. We like to think we can hang, but we’re usually hiccuping and making vacation plans with strangers 1.5 glasses in.

She said: It depends on the day, but we both love a good glass of wine: Sancerre for Johnny, Chardonnay for me.